The below is a brief aggregation of recent blogging work authored by yours truly, craftily curated for your perusal, scrutiny, and/or the fulfillment of duties pertaining to loyal readership:

The World Should Not Tolerate Modern-Day Slavery in Qatar – In which I call FIFA chief Sepp Blatter many mean names and lament the sad state of affairs surrounding the already-tarnished 2022 World Cup. We’re seven years out from this confounded tournament and the whole thing’s already a grade-A categorical cock-up. Beyond the pig-faced corruption and portended poor playing conditions, we’re somehow sitting here in the year 2015 and Qatar is harnessing straight up slavery to build infrastructure for a major international event. If our leaders are really as dedicated to eradicating modern-day slavery as they like to think they are, the 2022 World Cup needs to become a more major battlefield in that effort.

In The Tinder Age, Even Bad Dates Can Be Useful – In brief, technology allows for people who go on dates to increase the scale of their dating to the point where a reasonable sample size of events can be collected and analyzed in a relatively short amount of time. This means even the worst dates can still be treated as building blocks for introspection and analysis. I should note someone on Facebook said there was a How I Met Your Mother episode about this but I wouldn’t know anything about that. Nor do I know all that much about Tinder dating outside of the enjoyment derived from treating it as a leisurely spectator sport. The late Greg Giraldo had a great routine about online dating that applies well to Tinder, though not vis-a-vis yours truly as I’m rather pleased with my current relationship status. I imagine the routine rings true though to many who got hitched pre-Tinder:

Tinder and modern online dating are pieces of a greater trend in which, as mentioned, broader swaths of data allow for keen and precise analysis. Ever since I got into baseball sabermetrics, the idea that seemingly unquantifiable elements could be condensed to a string of integers has astounded me. High school mathematics would have been so much more fascinating if we had presciently conjured up analytics rather than drill binomials. I think in the shower a lot about how my math teachers could easily have hooked me if they had just thought to explain the why.

How People Analytics Can Kill Pointless Meetings – Staying for now within the subject of analytics, a piece focusing on a brand of analysis that seeks to optimize work methods and company policies. The folks behind VoloMetrix (which sounds like the sort of analytics company a Bond villain would run) glean insight from a data pool consisting of over 1 billion work meetings. That’s an astounding number of meetings. Think of all the bored people. That’s billions of bored people. Billions. Bless their forsaken souls.

Beginning soon I’ll start posting more regularly. This will include some book reviews and other basic updates that I hope you find, at minimum, readable. . RM

The below is a brief aggregation of recent blogging work authored by yours truly, craftily assembled for your perusal, scrutiny, and/or the fulfillment of duties pertaining to loyal readership:

Congressional Politics Threaten NASA’s Mission – In which I compare NASA and other mission-based government agencies to an unfortunate child caught amid the incessant squabbles of two warring parents. Except these parents hold the purse strings that determine whether we visit Mars and/or learn how to deal with the effects of climate change. The unfortunate child is an $18.5 billion space agency.

You’re More Likely to Visit the Moon Than Pick a Perfect March Madness Bracket – In which I relay information compiled by many authors pertaining to calculations made by DePaul professor Jeffrey Bergen. The gist: Even in an alternate universe in which Warren Buffet is still offering $1 billion for a perfect bracket, Alternate Universe You isn’t going to win so don’t bother getting too excited. Actually, now that I think of it, there may very well be an alternate universe in which you do win because there may very well be an unfathomably large number of alternate universes out there, in which case you should still stave off excitement because you’re stuck in this one. Sorry.

Calm and Confidence Will Slay the Toxic People in Your Life – A riff off this article by a psychologist who astutely sums up the uncomfortable bind one is in when targeted by unhelpful, overly critical people. I don’t have anything particularly funny to say about this one. It’s just an intriguing thing to think about.

Words of Wisdom: Henry Becque and the Hypocrisy of Equality – I procured a nifty dictionary of quotations from a Little Lending Library this weekend, which is something that is both 1) an insufferably hipster sort of anecdote that I apologize for bringing up and 2) rather fortuitous considering my Words of Wisdom responsibilities rely far too heavily on random scouting on Wikiquote. Within said dictionary was the following quote by the somewhat-obscure 19th-century French dramatist Henry Becque:

“The defect of equality is that we only desire it with our superiors.”

I take that as pretty accurate.

Becque, who sort of looked like the dude who always gets held up in cowboy movies, was a pioneer of French naturalist theatre who somehow managed to avoid playing a major role in any of my assigned reading during grad school. It’s said that he wasn’t very popular in his day but served as an influence for the Ibsens and Shaws to come. I imagine there’s probably a lot more written about him in French on account of he’s French.

It was a slower week on the output front due to the celebration of this writer’s 26th birthday and the sad fact that this writer spent his 26th birthday, as well as the remainder of the weekend, sicker than the proverbial dog. On the bright side, I got to spend some quality time with the loving girlfriend who nursed me back to life. Making her the beneficiary for my work-issued life insurance policy has apparently not turned her heart against me. Score one for love. 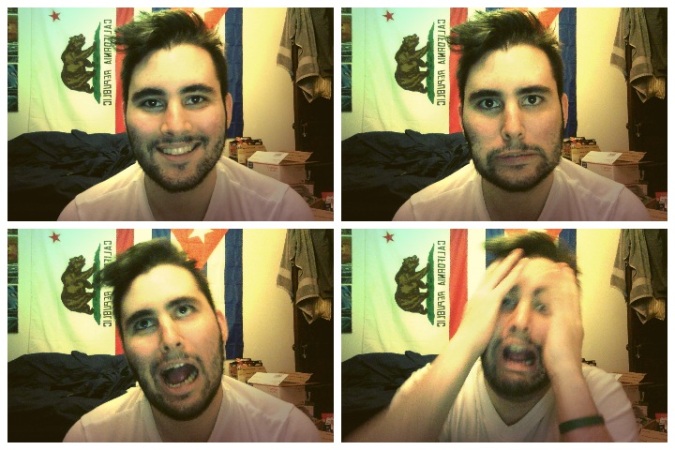 Thanks for visiting my website. Sorry it’s in such crummy condition right now. It’ll get better, I promise.

Pretty soon I’ll have a blog here. The ABOUT and NOW PLAYING pages are up and ready for your perusal. See, it’s getting better already!

Keyboard Cat will entertain you in the meantime: